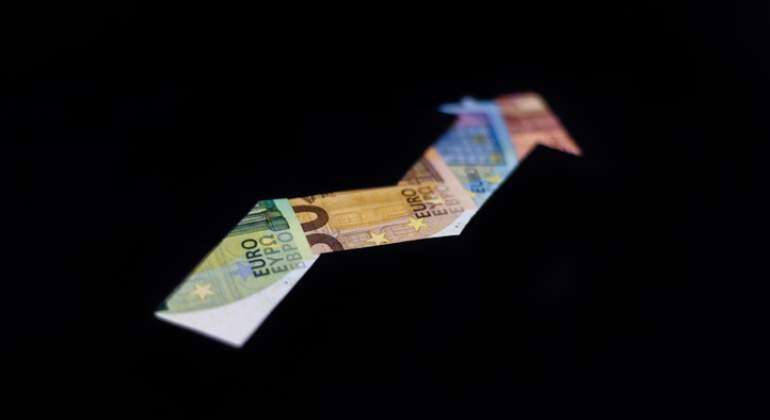 Inflation adds to the factors of concern in the exit from the economic crisis caused by the pandemic, but experts consider that the recovery will not derail due to its rise as long as it is contained below 3%, as it seems. The common denominator among the analysts consulted by the Economist to judge the impact of the rise in prices on the situation is that there is too much uncertainty.

The economists surveyed, from different positions, agree that for the moment it is not worrying, given that the underlying rate – the one that eliminates the most volatile elements – is contained. They consider that it is a question of a rise in the prices of goods, communicated through the value chain, and not of an economic pathology that the central banks must urgently address.

They venture that its rise is likely to be temporary and that it may also ease the battle against debt at a historic moment when the global economy has incurred record debt that has yet to be managed.

The economist Javier Santacruz, considers that only inflation rates above 3% cause significant imbalances in the current balance and public accounts, since a substantial part of the economy is indexed to inflation, especially costs: pensions, salaries, tax bases of the main taxes, energy costs (import of energy in dollars). That is why, in the short term, he rules out that price developments will be a drag on the recovery.

For their part, experts coincide in pointing to bottlenecks, value chains, raw materials, freight and oil as elements of the cocktail that, through international trade, is causing temporary price increases. In this sense, the director of Economy of the Círculo de Empresarios pronounces .

In this sense, and despite agreeing that the rise in inflation is temporary, Mario Cantalapiedra , professor at Deusto Business School, highlights that its effect is more harmful for small companies, given the difficulty of transferring their extra costs to consumer prices , as large companies can do.

In any case, CEF professor Juan Fernando Robles, estimates that in the current situation inflation is not a problem of serious importance and even glimpses that it would be more harmful if it was asleep, as a symptom of anemia of activity, in which Cantalapiedra agrees: “In macro terms, its appearance is not a bad figure inasmuch as it announces an economic recovery. ”

“The issue of inflation is much more worrisome than what the central banks are telling us and it hurts the most disadvantaged sectors,” says Daniel Lacalle, chief economist at Tressis.. “What we are experiencing is that all prices that have to do with economic activity and raw materials are skyrocketing, and it is very worrying,” he adds.

The economist explains that inflation was already a problem in 2018 and 2019. “We already had many protests about the increase in the cost of living,” he says. In his opinion, during the confinement by the coronavirus in 2020, prices were maintained. “Despite the collapse of the economy, inflation remained practically flat, which can be translated into an increase. The economy fell more than 10% and prices remained,” he says.

Experts detect a distortion in prices after the coronavirus crisis
For his part, Víctor Alvargonzález, founding partner of Nextep Finance , highlights that inflation is tense upward on one side and downward on the other. In his opinion, global trade flows are still in force and the digital economy is advancing, which translates into a deflationary trend.

“They are two very strong forces,” he says. However, it points out that there is also an inflationary distortion due to liquidity injections into the system and the imbalance in savings generated by the pandemic itself. “At the level of consumption, people are going out to spend the much they have saved. To this we must add the stimulus plans and the money supply. If you add all this, there is a strong inflationary pressure,” he says.

“My opinion is that we will have higher inflation than before the pandemic, but not to the extreme of what many people say,” sums up Alvargonzález. The founding partner of Nextep Finance recalls that, in the stock market, “inflation by itself is not bad for investments.”

The specialist remembers that it generates many opportunities in the market. In any case, Alvargonzález considers that “it is logical that when the global economy opens again after a stop like the one we have had, there will be an imbalance between supply and demand. What we have to see now is how it is balancing,” he explains.

Diego Sánchez de la Cruz, director of the Intelligent Regulation Forum (FRI) , asserts that “we have spent 12 years of monetary experiments far from all orthodoxy, giving central banks the power to clean up the public deficit, the debt, and solve the problem. of unemployment “. Sánchez de la Cruz considers that “along the way, it has been forgotten that it is newly created money that is injected, and this has distortions and breaks the price system.”

The specialist explains that, however, this monetary policy of recent years has not been transferred to final prices. “A good part of the newly created money has remained securitized in the most financial part of the economy. We have had an increase in the prices of assets in the stock markets that are not supported by productivity gains,” he says.

However, it warns that it is already moving to consumption. “We are already seeing it in energy, which on the other hand is a highly intervened market, and in other cases, such as food,” he adds. Diego Sánchez de la Cruz warns that “we have a problem below and above higher prices and distortions in the securities and public debt markets.” For a way out of this situation, he recommends “a withdrawal of stimuli,

For his part, Juan Fernando Robles, professor at CEF, calls for prudence when withdrawing stimuli despite rising inflation. “Withdrawing the stimulus could be something dramatic for the general economy,” he considers. “More than living with inflation that is a bit more canned,” he adds.

Robles acknowledges that inflation “can be a negative thing because in some cases it can induce problems, such as increased spending on pensions or salaries for civil servants. However, he adds that “it will be less harmful than withdrawing the stimuli.”

Robles considers that the latest figures on inflation “is a normal and natural process within the monetary and expansionary policy of the European Central Bank and the increase in costs such as energy. In his opinion,” we are facing an ultra-expansive monetary policy necessary to sustain the massive debt expansion of the states “.

In this sense, the professor of the Financial Studies Foundation (FEF), Miguel Ángel Bernal , points out that “the concern about inflation is not trivial, especially in a heavily indebted world where a way to pay that indebtedness, in a less traumatic way , is to generate inflation “.

It also assures about the possible impact that it may have in a world where capital productivity is falling with decreasing margins, inflation can affect consumption. “The key is how severe the price rise impacts, I think it is too incipient to be able to make predictions, now its impact may be considerable,” he warns.

For his part, the professor of Fundamentals of Economic Analysis at the Complutense University and deputy director of Fedea, J. Ignacio Conde-Ruiz , detects that this price increase is temporary and that it is due to two factors: “the step effect caused by the price of energy, which in a pandemic were very low but are already recovering “and” the exponential growth in demand for some services, such as hotels and restaurants “to which is added a tight supply due to the destruction of businesses experienced in the worst months of the crisis.

For this reason, Antonia Díaz, a doctor in Economics from the University of Minnesota and a professor at the Carlos III University of Madrid , assures that the origin is temporary due to the bottlenecks that the pandemic has created in international value chains.

“The magnitude of the increase, however, not only depends on these bottlenecks but on the market power that large companies operating in these value chains, which can take advantage of the moment strategically,” he says.

Although the senior economist at Funcas, María Jesús Fernández , warns at this point , “we cannot rule out the beginning of a wage-price spiral from the rise in price of raw materials and its possible transfer to final consumer prices, nor that the enormous The monetary mass that the central banks have put into circulation ends up driving inflation, giving rise to more lasting increases. As for the impact on consumption, it could reduce its growth in real terms “.

Growth forecasts
The consensus of specialists recognize that growth will once again be compromised by the arrival of the delta variant of the coronavirus and its impact on tourism.

The economist Almudena Semur emphasizes that “the rapid growth of the fifth wave of Covid in the middle of the summer campaign will result in an inflow of tourists below 50% compared to the data for 2019”. In his opinion, “the growth expectations of the Spanish economy are between 30 to 40%, lower than the objectives set in the general state budgets for this year by the Government team.”

According to his analysis, the delay and decrease in the funds foreseen from the European Union of Next Generation EU, for this year, actually have as a consequence, the decrease in the speed of economic recovery, and will force the executive to carry out a debt issue for a figure greater than 10 million euros “.

Diego Sánchez de la Cruz agrees with Semur. “I am concerned about two fronts in the face of recovery, the labor and the fiscal,” he says. “To the extent that interventionist sticks are put in these two axes, growth capacity will be lost.

Beyond that surge of European funds and the summer, at the end of the year we will be able to verify that thousands of companies have been lost and that there are practically 5 million people that we can consider as unemployed, “he says.

“The forecasts for Spain must be reviewed now”, emphasizes Víctor Alvargonzález. “The other day we saw that the EU increased its forecasts. They are behind the events,” he asserts. Alvargonzalez points out that “it is evident” that the delta variant of the coronavirus will affect the reactivation of the tourism sector. “It is going to affect us, we must lower the forecasts for Spain,” he points out.