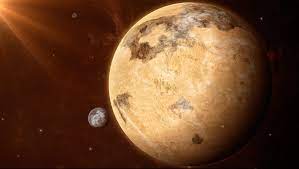 Founding stone of what is often considered the best science fiction literary saga in history, the novel ‘Dune’ created in 1965 a fascinating universe from which both ‘Star wars’ and ‘Game of Thrones’ have drunk. Frank Herbert’s work, a complex reflection on politics, power, ecology and religion set in the year 10191.

Has had a capital weight in the pop culture of the last half century through books, movies, series, comics and video games. For this reason, and taking advantage of the arrival tomorrow in theaters of the cinematographic version by Denis Villeneuve, we review here the vast universe of ‘Dune’ through some of its keywords.

Arrakis third planet of the Canopus system, located in the constellation of the Argo Ship, is the only place in the known universe where the spice, or ‘mélange’, is found, an expansive drug of life and mind produced by the gigantic worms that live in its sandy deserts.

Also known as Dune, it is the planet on which Paul Atreides, turned messiah of the Fremen tribes, faces a last and epic battle against the Emperor and Baron Harkkonen.

Bene Gesserit. They govern the political and religious destinies of the empire from the Chapter House. They are a feminine order (the revered mothers), closed, monastic, with enormous control: they establish carnal alliances to spread their power. Silvana Mangano and Siân Phillips were the mothers in the first version. Charlotte Rampling is in the second.

Harkkonen House The Harkonnen house is very disturbing in Herbert’s work, but Lynch gave it traits much closer to his cinema: oil, smoke, metal, sex and violence.

The lustful and festering Baron Harkonnen was played by Kenneth McMillan, while in Villeneuve’s version he is a Stellan Skarsgard subjected to 80 hours of makeup.

Dalí. Alejandro Jodorowsky visited the painter in Barcelona and proposed to him to play the Emperor in the film version that he tried in vain to build in the mid-1970s. Dalí accepted, provided he was the highest paid actor in Hollywood: $ 100,000 per hour.

Spice Substance extracted from the planet Arrakis that, in some way, becomes the engine of the universe: it prolongs both the life of those who consume it and their cognitive capacity, even granting oracular powers, and allows interstellar travel. Its harvest is very difficult, since it can only be collected among the desert dunes of Arrakis with the risk of attracting the gigantic and dangerous worms that generate it.

Fremen They inhabit the deep desert of the planet Arrakis and are capable of surviving in the most extreme conditions They consider Paul Atreides their redeeming messiah and will aid him in his battle to the death against the Emperor In Villeneuve’s ‘Dune’, Javier Bardem plays its leader, Stilgar.

Worms In the books they are creatures from the planet Arrakis that can measure up to 400 meters. Water is your worst enemy Lynch filmed Paul Atreides’ fight with a worm as if he were Ahab against the white whale. It took Villeneuve a year to find the perfect design.

Herbert, Frank Tacoma ecologist wrote the first book in the series in 1965 had previously published pulp stories in some magazines. It interested him from Jung to Zen Buddhism. He wrote six novels (the set of ‘The Chronicles of Dune’), the last of them, ‘Chapter House Dune’, published in 1985, a year before his death.