Google is ready to present the new reiteration of the mobile operating system Android in a new version, Android 13 “Tiramisu”! The company had recently launched its predecessor, Android 12, but users from across the globe are looking forward to the release of Android 13 “Tiramisu.”

The anticipation among tech lovers and general android users has peaked with the internal code or, commonly known as ‘Dessert name’ of Android 13, which is announced to be Tiramisu, a popular coffee-flavoured Italian dessert!  The new Android 13 “Tiramisu” has newly developed features and refined, internalised improvements, which is a follow-up to Android 12.

The new and sophisticated Android version is ready to be launched with another ‘cute’ codename. Android 13 “Tiramisu” will be released, as a preview version, in February 2022 as per the latest news! With time, the system will undoubtedly come out in the third or fourth quarter of 2022, somewhere between October and December. The new launch has been speculated to be done after the official release of Android 12L. 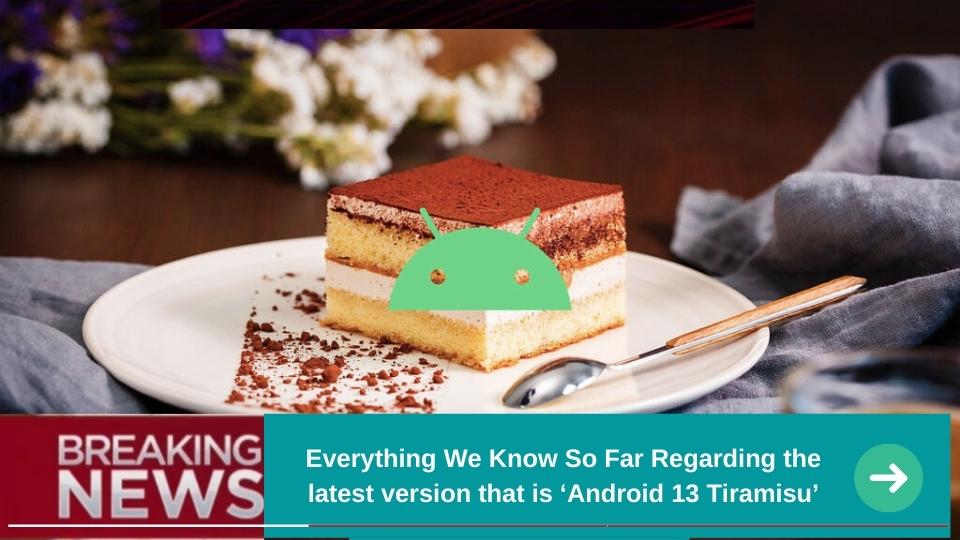 The new internal codename is intriguing to android users worldwide, especially the geeks. Android decided to name the 13th mega release of the OS, retaining the custom of naming all the new coming versions as desserts, Tiramisu. Android had chosen to stop using desserts to be the codename back with Android 10, just plain android 10. They did restart this practice with the next version.

Android 12, the 19th version, just came out on October 4, 2021, and is still new to devices, but the developers seem to have updated and decided to launch the renewed operating system in the market.

Android 13 “Tiramisu” will be available on devices such as:

Google’s range of smartphones. Other devices from Samsung will be available for accessing the latest update of the Android 13. Some devices, namely being,

(as per reports have suggested online),

and OnePlus has also pointed out to be available to get the latest update in their devices.

Also, LG, which has called it quits from the smartphone market, will have the latest update of Android 13, the last of smartphones launched in 2019 and later. Namely, t be, (as per online presumptions)

The launch of Android 13 “Tiramisu” has garnered users’ attention and has been reported to have many new updates! Some top features of the latest OS are specifically said to be options for language customisations for apps, sustaining longer battery life, and improved security.

Every year, a new version of Android is being brought to the market by Google, and users never seem to be tired or disappointed by the new features, which get unlocked with the very release.

This time, direct light has been thrown on the latest feature of Android 13, which might be the first release adding full support for Bluetooth LE Audio.

Creators recently merged an LC3 encoder and added the codec to users in settings. As the makers say, it will be the highest priority A2DP source codec. Also, Android 13 will present a Single-Line Clock Layout On the Lock Screen this time. Featuring the new energy management feature, The Android Resource Economy (TARE), users will be able to work on the device’s energy-use management. Another awestruck part of Android 13 “Tiramisu” will be the Tap-to-transfer feature!

With much more in the basket to be offered, all android users can assemble for a new heightening, the elating experience of the brand new version of the highest used Mobile Operating System, Android, to be released this year!