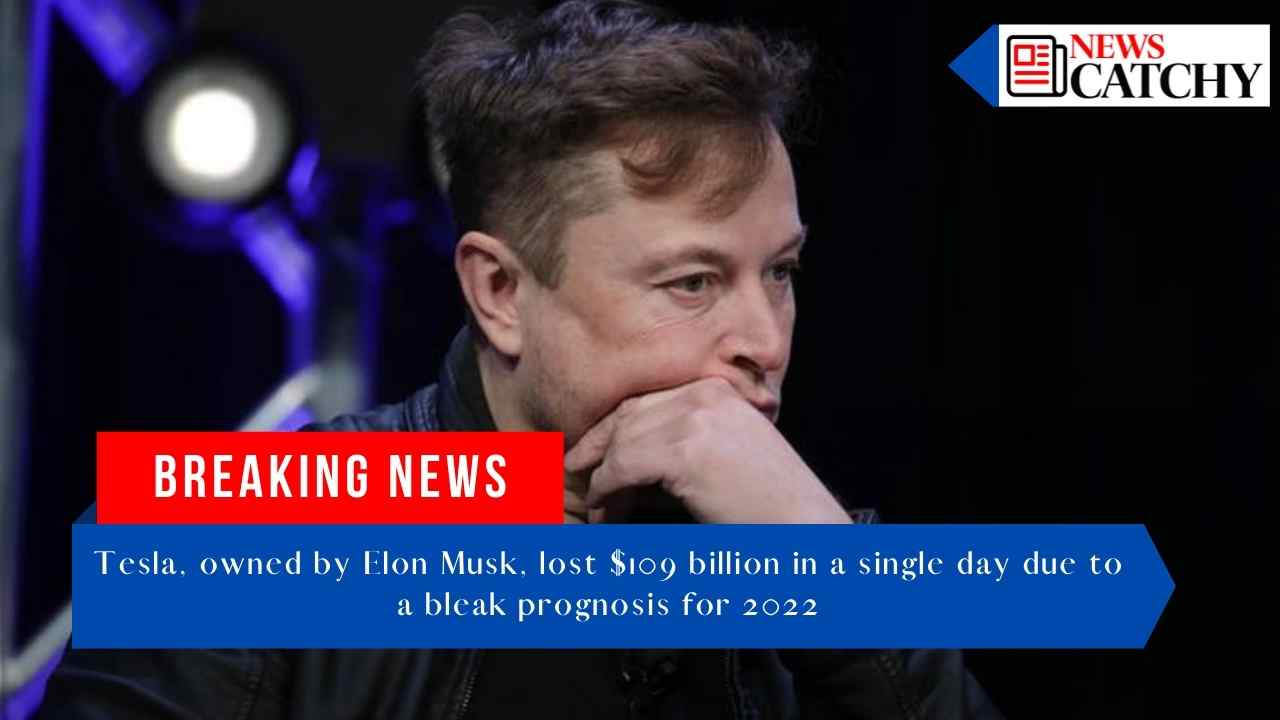 2022 has started with a shaky start for Tesla CEO Elon Musk.

Despite delivering a record number of his great cars in 2021, electric car Tesla owner Elon Musk has lost nearly $109 billion in market valuation in a single day after its fourth-quarter earnings and outlook had unfortunately failed to impress the investors.

The slump in market valuation for Tesla last week was majorly due to the automaker’s non-impressive revenues and shortfall to announce any new vehicle. Tesla emphasised more on a humanoid robot called Optimus, but nothing like bringing a new car failed to impress the investors.

After rebuffing at a White House forum that was meant specifically for electric vehicles, the Twitter-obsessed billionaire had also offended President Joe Biden on the social network on Thursday. And despite the company, Tesla posting record profits on Wednesday, the electric car maker’s stock tumbled 11% Thursday, slashing Musk’s fortune by $24.5 billion, as Forbes calculates it. He’s still the richest person in the world at $218.3 billion.

Tesla had successfully produced 305,840 vehicles in the fourth quarter, a 70 per cent increase over the previous year.

However, Musk had commented the last week that Tesla would not bring any new electric vehicles to market in the year 2022, despite so much buzz around Cybertruck, Semi truck and a much cheaper version of Tesla.

As per his statements, 2022 is the year “we will be looking at several factory locations to see what makes the most sense with possibly some interesting announcement by the end of this year”.

This was also the second time the electric car-maker has lost more than $100 billion in market value in a single day, after such a fall on November 9 that took place last year.

“Our factories have been running at below capacity for several of its quarters as supply chain became the primary limiting factor, which is likely to continue through 2022,” Elon Musk has reported on behalf of his company in a shareholder deck along with its fourth-quarter 2021 earnings announcement on Wednesday.

Elon Musk has said that 2021 was a breakthrough year for Tesla and electric vehicles in general. The electric vehicle maker ended last year with $5.5 billion in net income, compared to $721 million in 2020.

Tesla has also reportedly been working on an electric car that may cost around $25,000, and there is no update as to when it will be released in the market.

Musk started the year strong. His fortune surpassed $304 billion in early January after Tesla announced it beat analyst projections by delivering more than 936,000 cars in 2021. Since then, Tesla’s stock has dipped 24%, making him $80 billion poorer in less than a month.

At a White House meeting, governors reportedly warned Biden that the US needed to move away from the pandemic

We rarely come to know of a billionaire who gets 10% of his fortune wiped out in a day and yet remains the richest person in the world. Musk had become the first person in history to cross the $300 billion thresholds in November after Tesla shares closed at a record $1,208.

Musk is ahead of LVMH CEO Bernard Arnault (worth $188.6 billion) and Amazon founder Jeff Bezos (worth $165.5 billion). Last year alone, Musk added $116 billion to his net worth, the biggest one-year gain Forbes has ever been able to track.